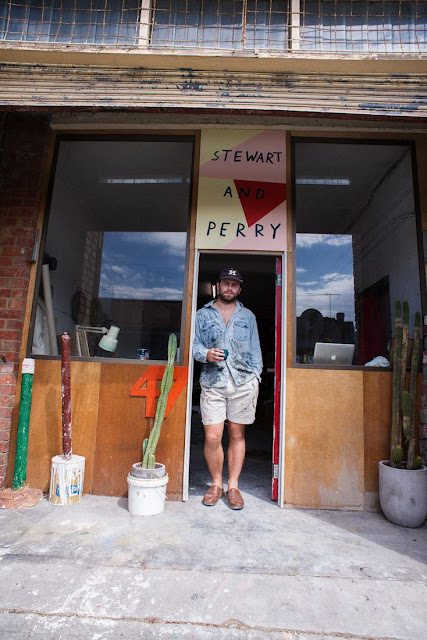 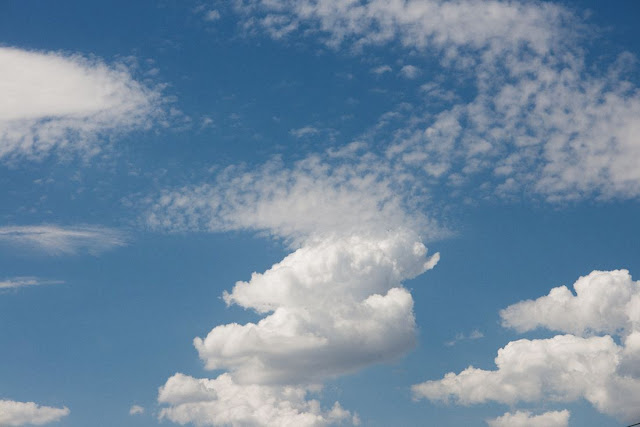 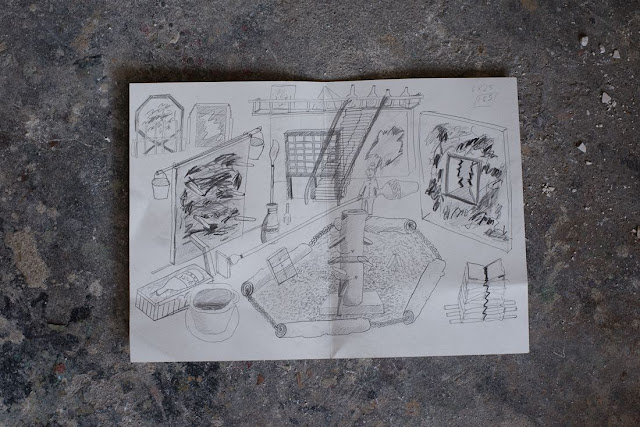 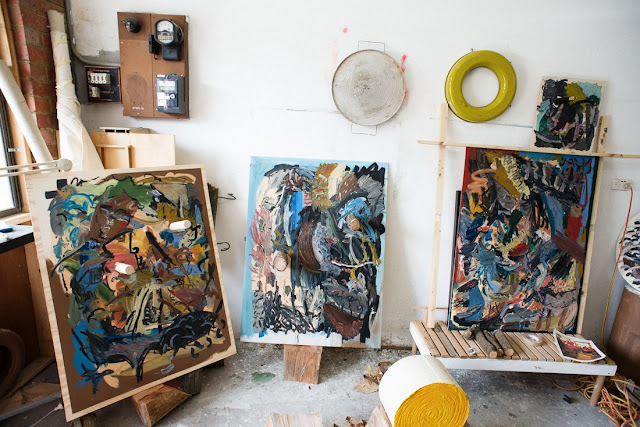 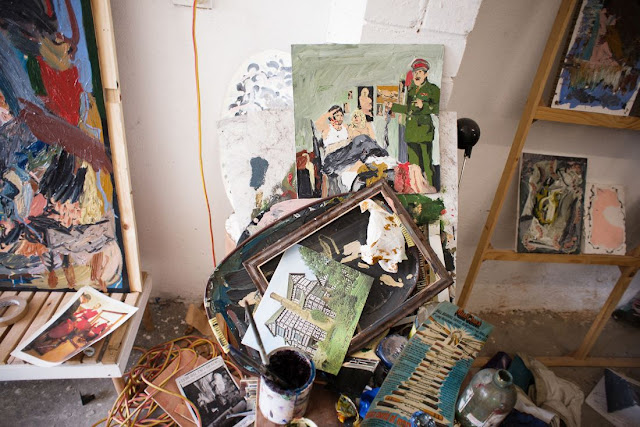 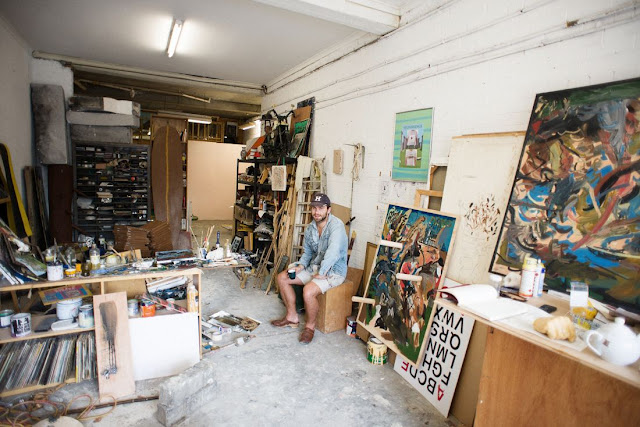 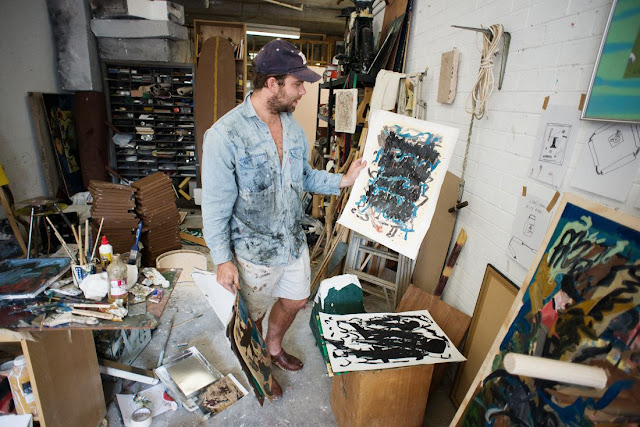 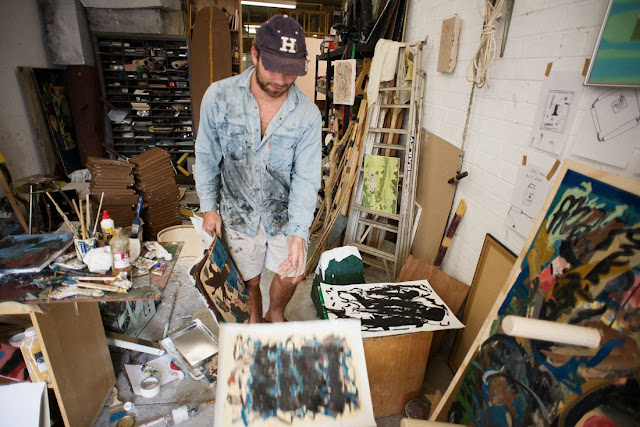 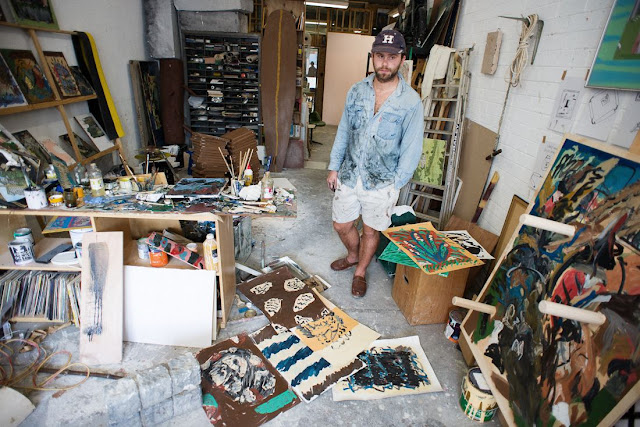 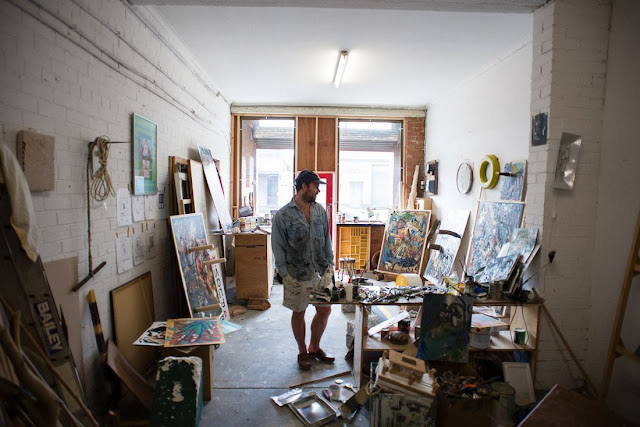 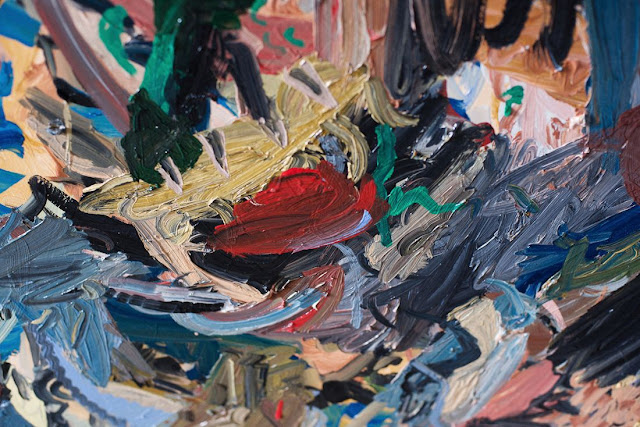 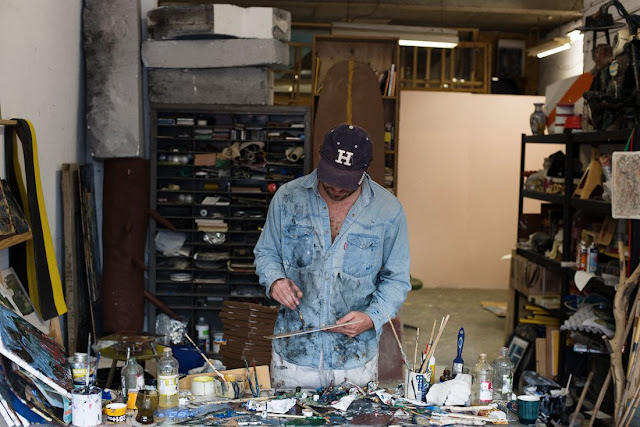 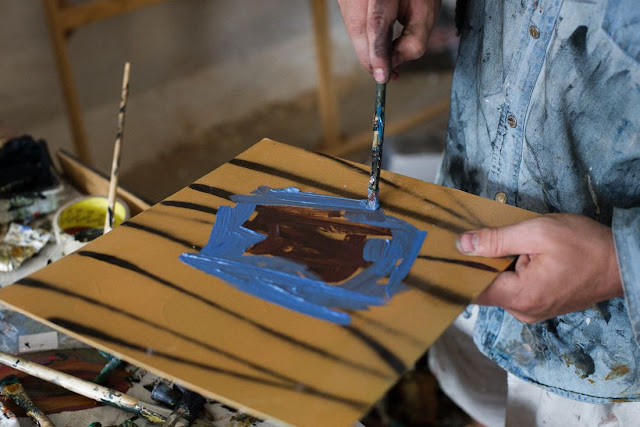 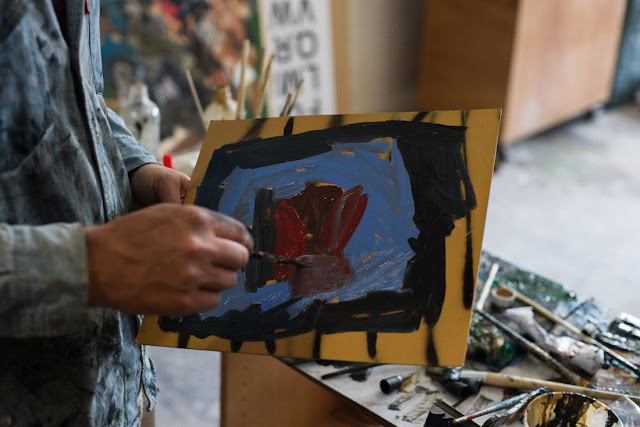 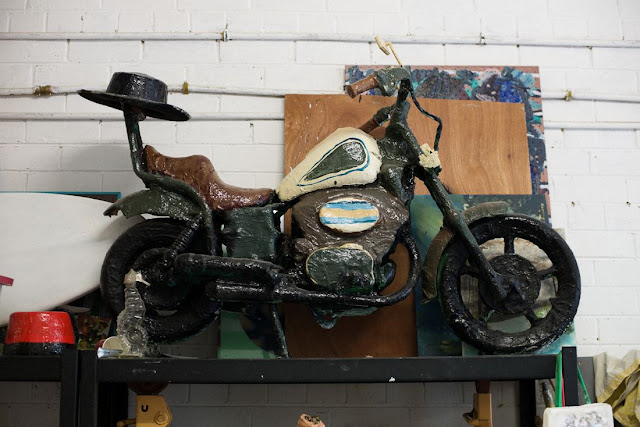 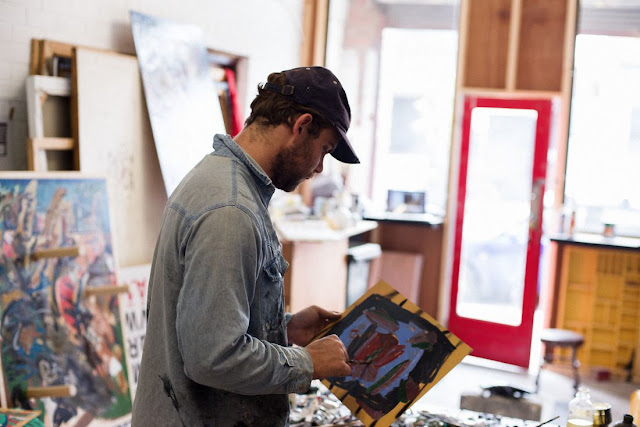 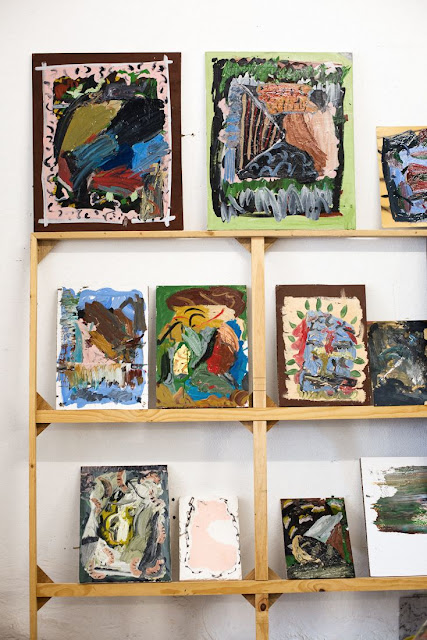 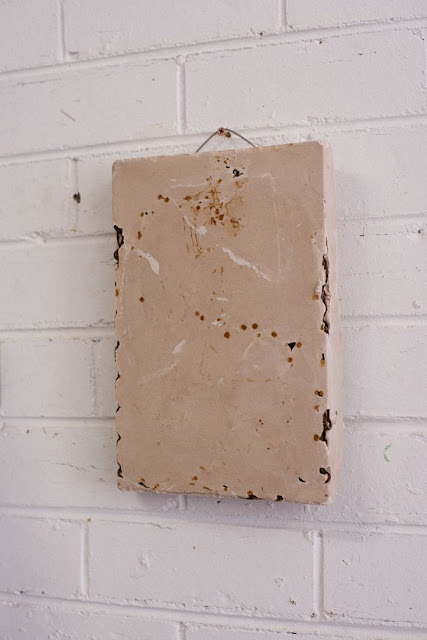 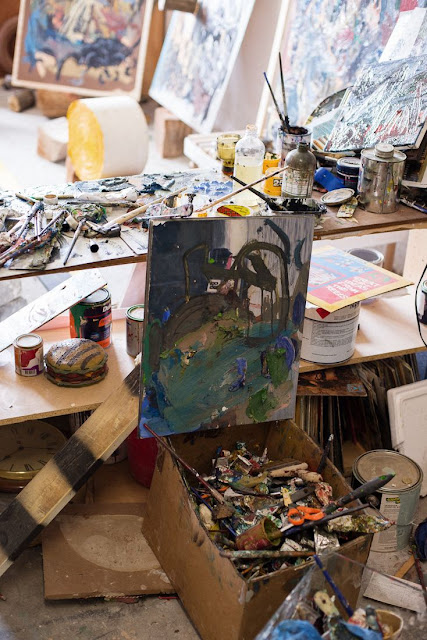 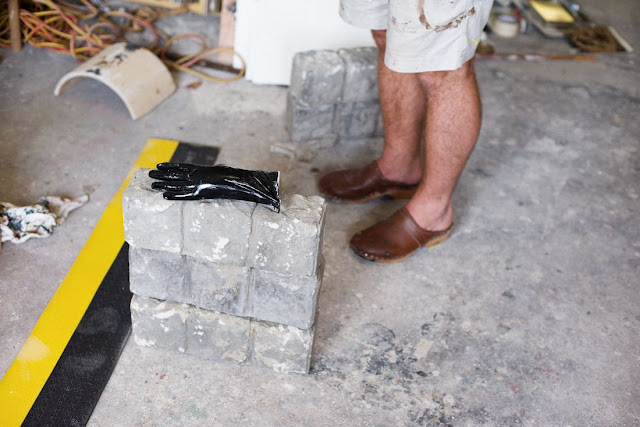 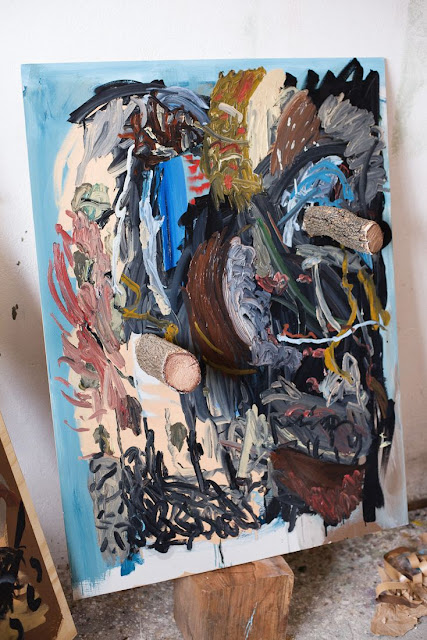 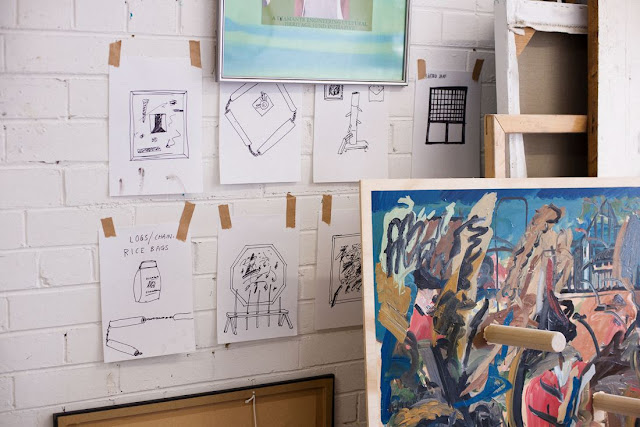 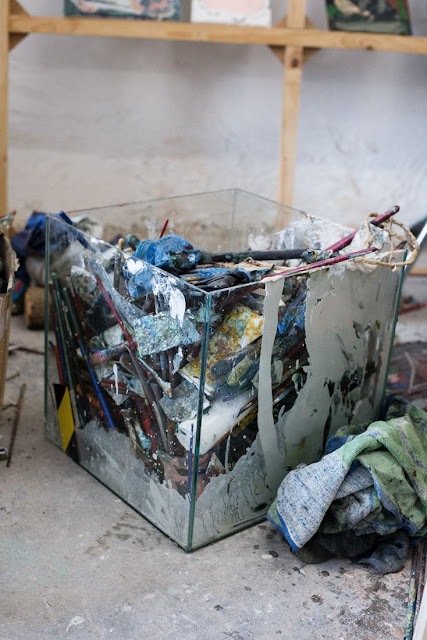 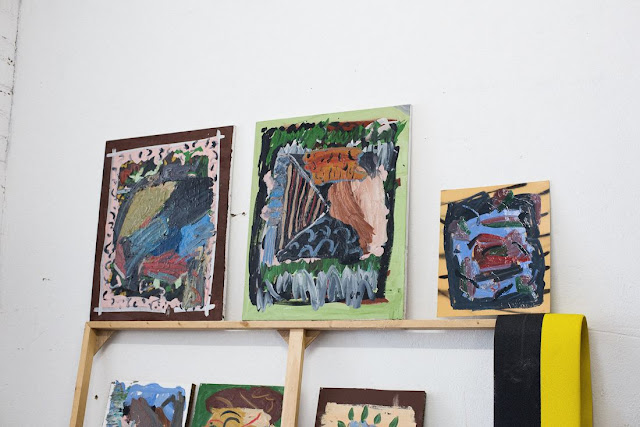 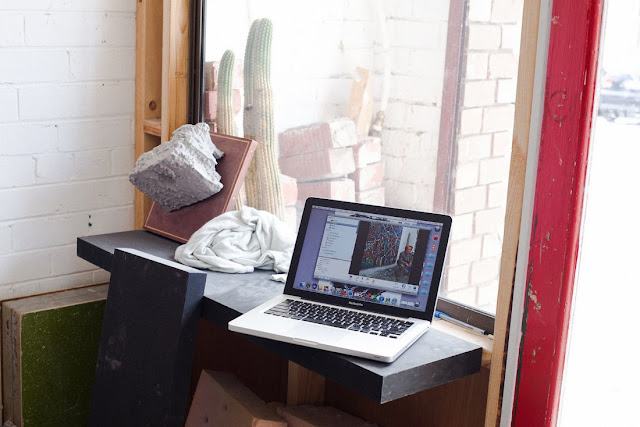 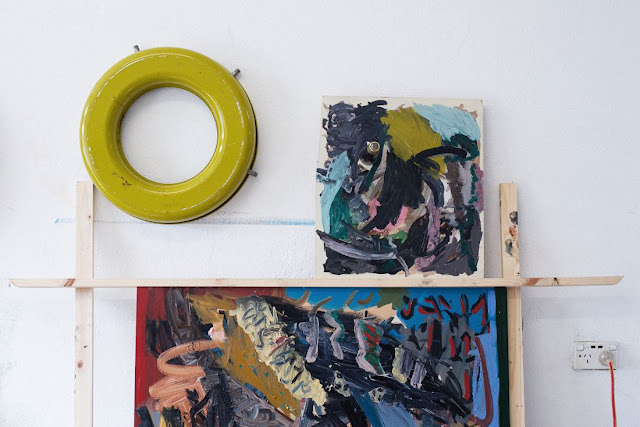 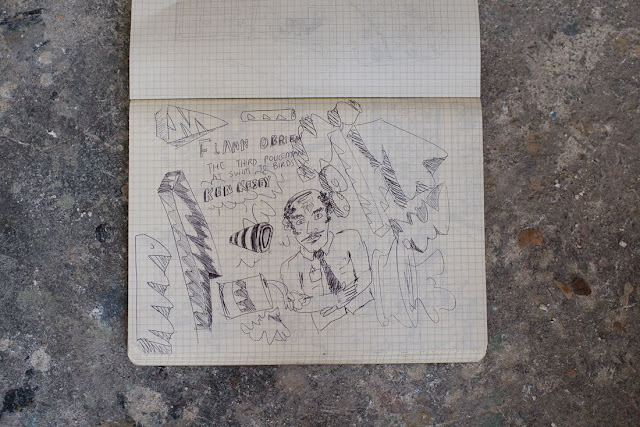 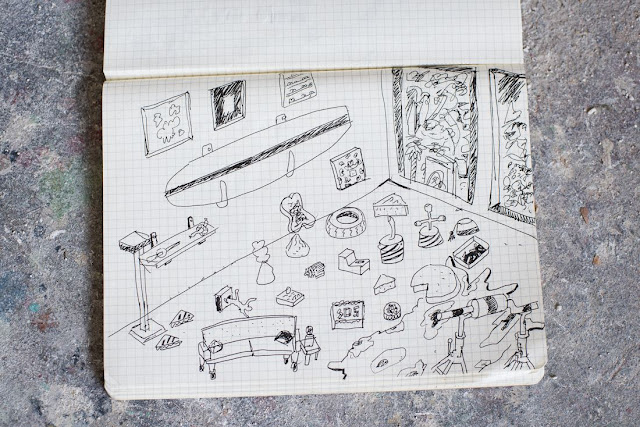 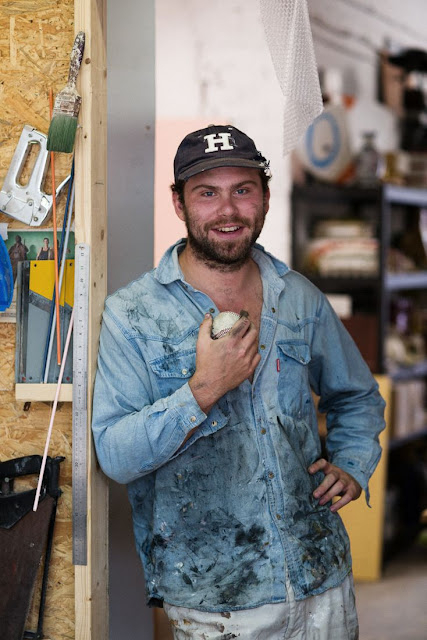 Jake Walker:  Hello Oscar, I am intrigued by your installation diagrams and wanted to ask, at what stage of preparing for a show do they occur?

Oscar Perry:  Well they happen early, as soon as I get a handle on the kind of show I want to make. For example with Utopian Slumps show I started watching films and TV shows with people fiddling around in garages. I then gathered together this imagery and start creating structural frameworks for paintings and a larger installation. Lately I've been watching a mixture of kung fu and 70s stoner films. Taking bits from both.  The diagrams start to fire up once I finish a few paintings. A weeks painting becomes a few scratchy lines in wobbly box. I like looking back through these drawings when I'm researching a new show. Its like looking into the diary of a interior designer who lost the grip on reality, sitting in the padded cell working out this season's look.

JW: I like the unhinged interior designer idea because I always feel like your installations have an inhabitable dimension to them. I feel like I could spend some time there, reading a magazine or eating a sandwich.
What is it that has drawn you to kung fu and stoner films recently? Do you start with the idea to make work about those genres and then watch them as research, or do you enjoy the subject as entertainment and then think "I should make some work about this"?

OP: I generally enjoy them initially as entertainment. Then I reach a point where I feel I can use them to push painting a bit further. I was looking at that Jackie Chan film Drunken Master. Which really got me hooked on the idea of 'Drunken Boxing'  a category of fighting techniques which imitates a drunkards movements. I kept thinking about this in contrast to that Paul McCarthy video 'painter'. Dressed up as De Kooning with the big brush and the big paints flapping about. I wanted to try and make some drunken boxing type paintings where I put in place some obstacles to disrupt the way I would normally paint. This all sort of led into a 70s Doc Ellis stoner walk about. I started looking for people who performed amazing feats while being intoxicated.

JW: I love that McCarthy piece, in once sense its a cruel parody of the whole pursuit of gestural painting but at the same time you get the feeling that there  is an autobiographical element to it.

De Kooning in contrast to most of his abstract expressionist contemporaries kept returning to real life as a starting point in order to keep some semblance of inner balance. I like how you have referenced a wing chun dummy with the sticks protruding from the paintings, I didn't immediately get this reference so it is interesting to find out your thinking behind it. How do you think these physical obstacles affected your painting? Did they disrupt as intended, or did they end up informing the rest of the painting, in a similar way to De Koonings use of collage and the portrait?   .

OP: I guess I assumed that the physical obstacles would dictate the movement of the painting and that visually this would translate. It wasn't as easy as that. They are difficult pictures to get a hold of. I had been thinking about making these painting all summer, so when I finally got round to it, I felt the pressure mounting and I tightened up. It wasn't until I saw that Josh Smiths show at Neon Park that I started loosening up again. I am getting used to disruption as key method in making work, it's like turning pictures upside down.

JW: So essentially your trying to shut down the analytical side of the brain when painting. That little voice that thinks it knows what good painting is?

OP: I don't know if if want to shut it off but I do want to put it aside for periods of time. I think its interesting when you can see someone is working very hard  to try and paint natural. I never works, its sort of like seeing the local born again pretending to speak in tongues. Good painting needs that push and pull of planning and execution. What I have come to appreciate is that you can use bad painting as much as good painting. Nothing sets a scene like a really poor painting, you get people ready to stick the knives in, then you take the knife of them and shake 'em down for some cash.

JW: I'm looking forward to checking out where the paintings finished up, where and when is it opening?

OP: Its tomorrow. Thursday the 18th of April at West Space 6-8. The show is call 'Home Honey, I'm High'. It's a large installation made up of painting and sculptures that looks into drunken method and intoxicated mimicry.