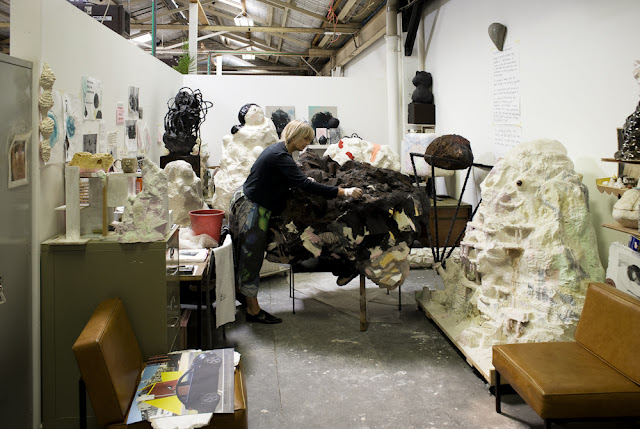 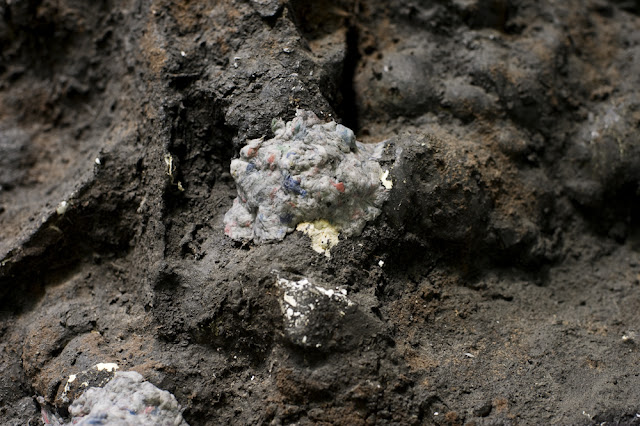 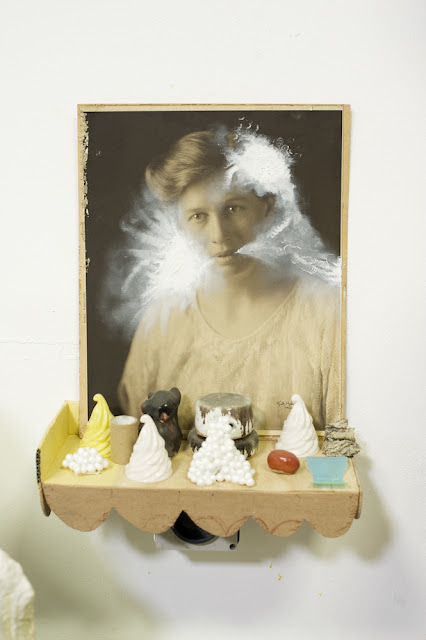 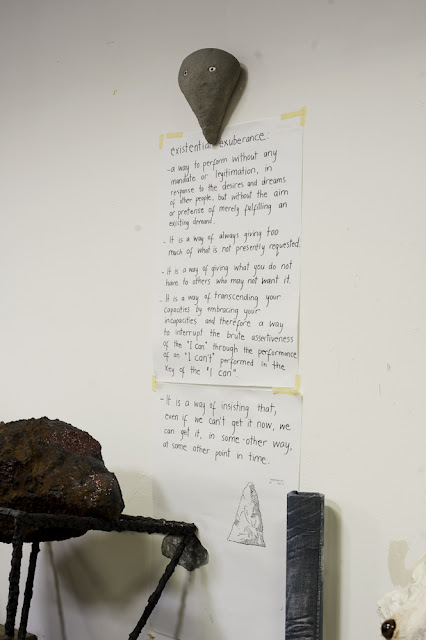 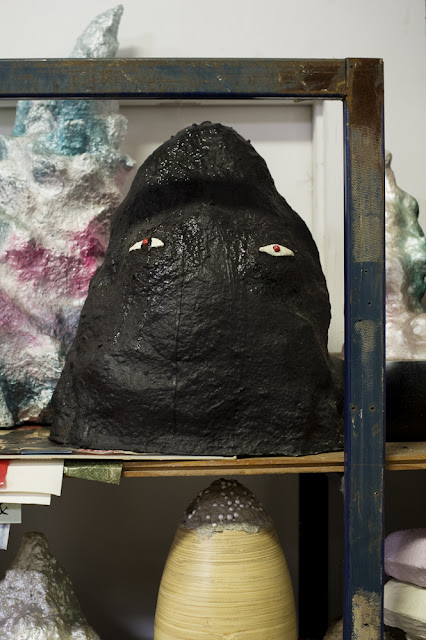 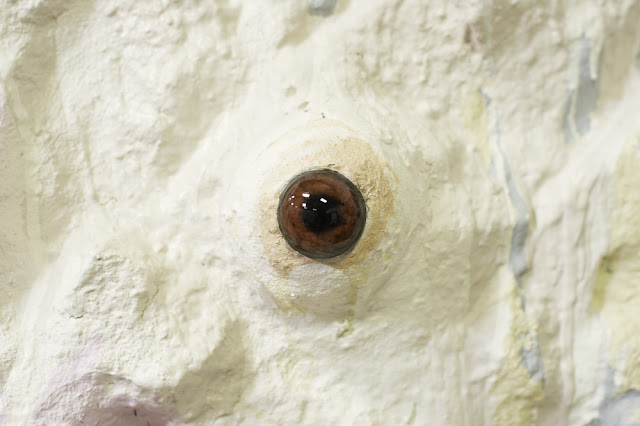 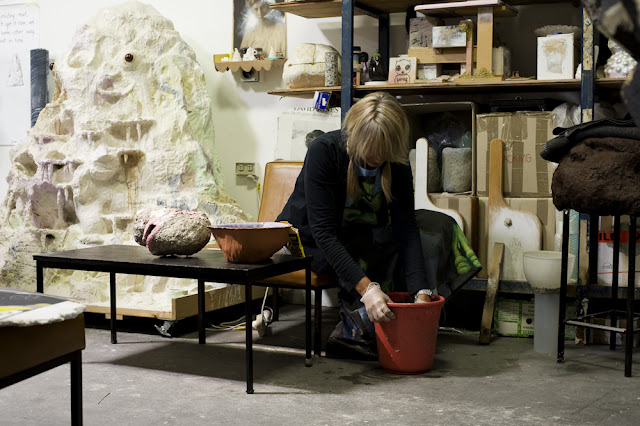 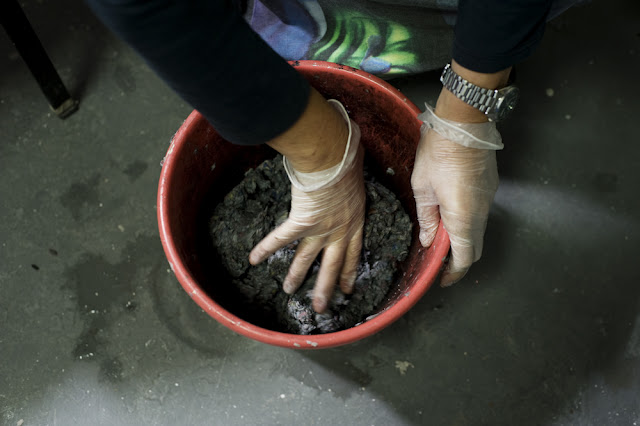 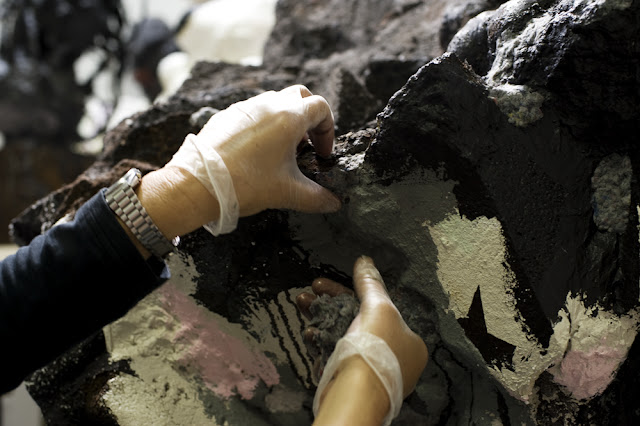 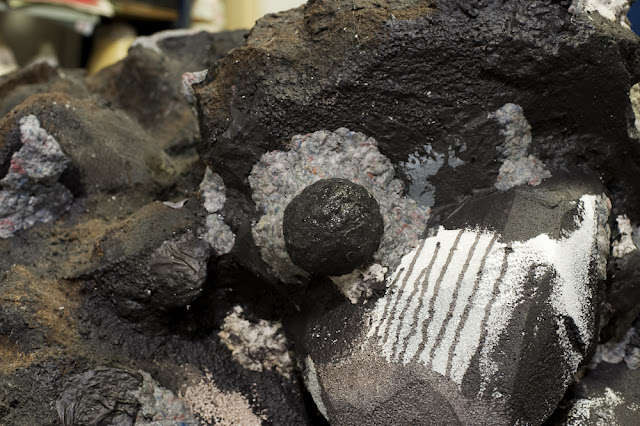 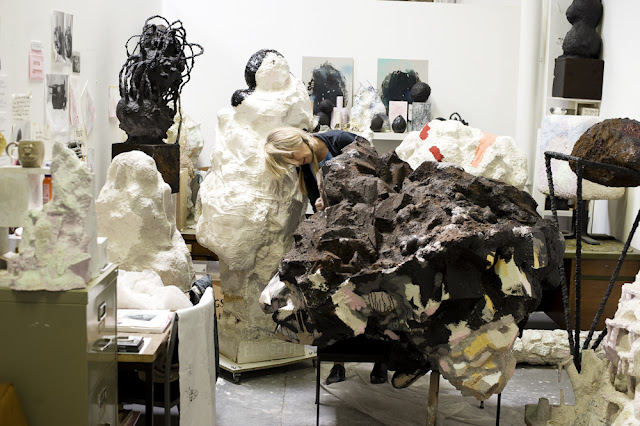 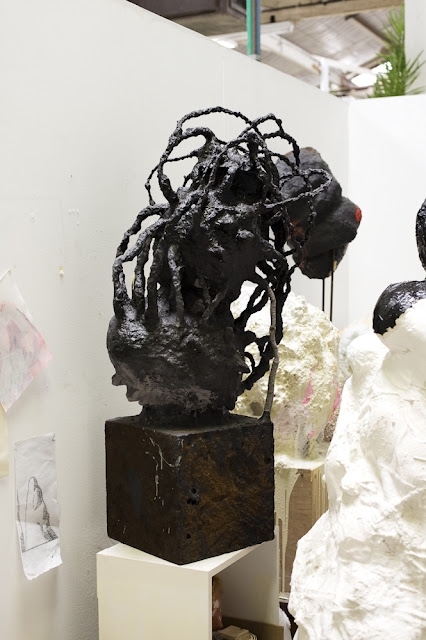 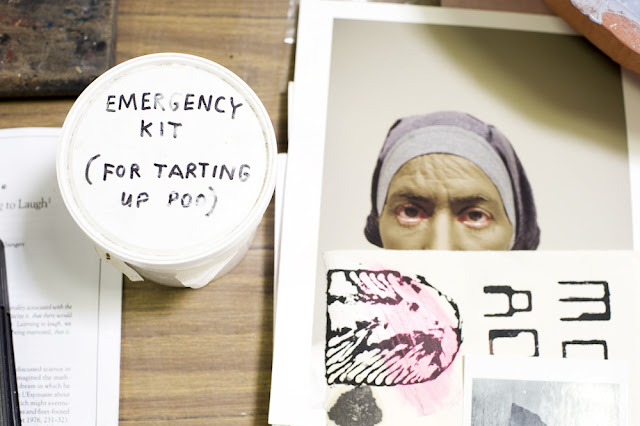 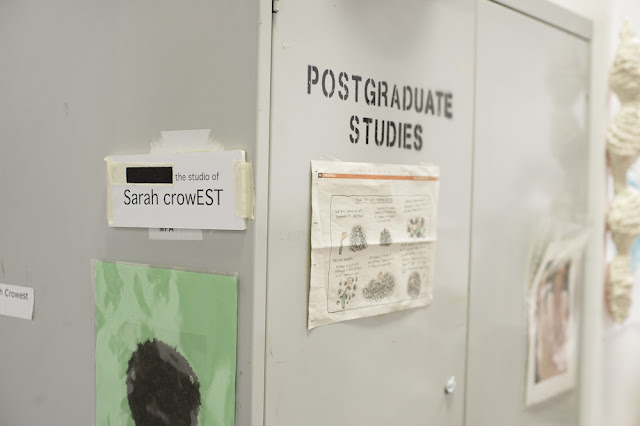 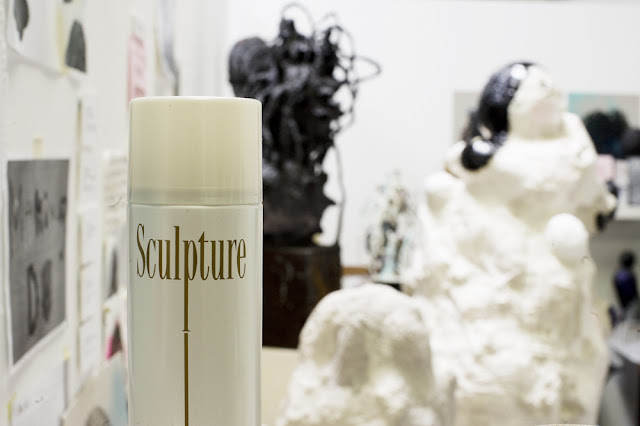 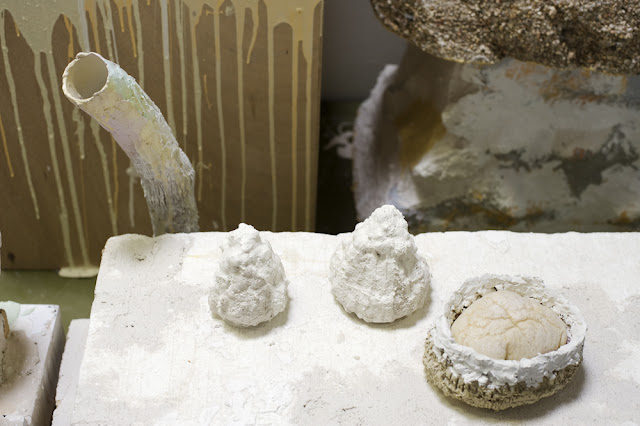 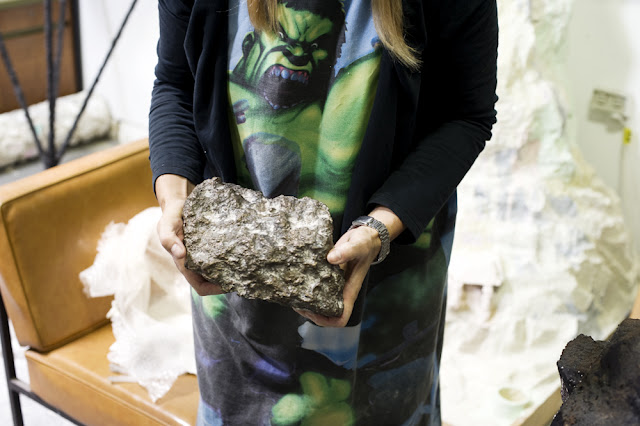 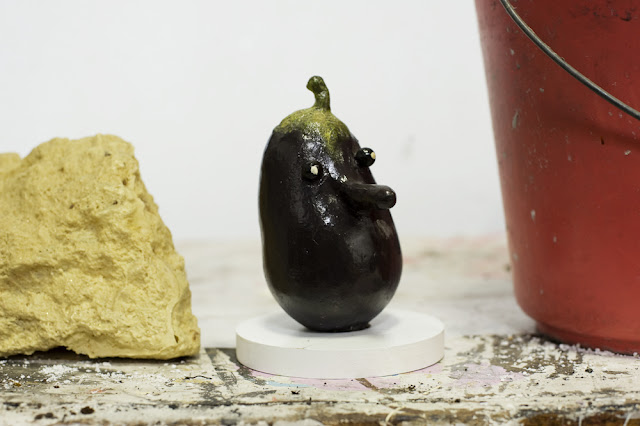 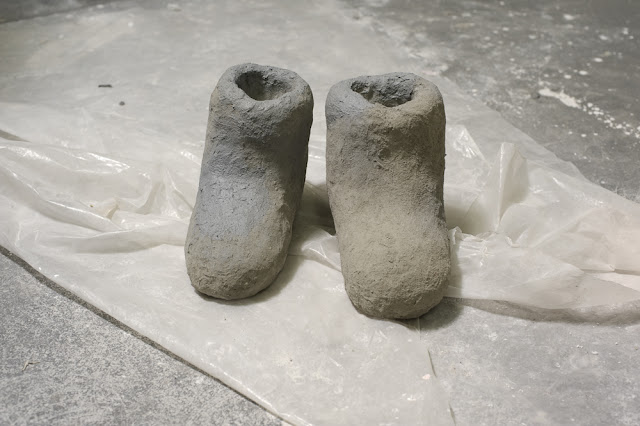 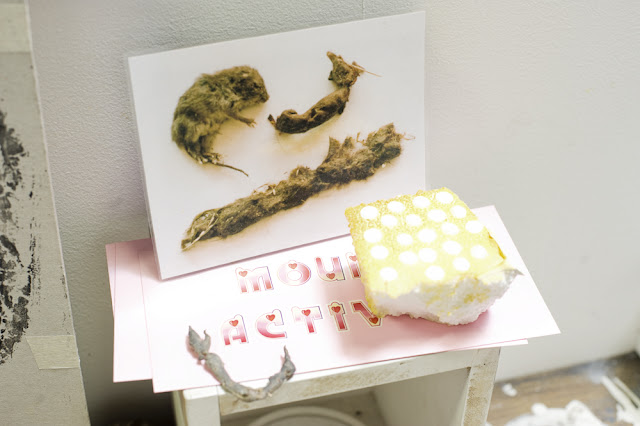 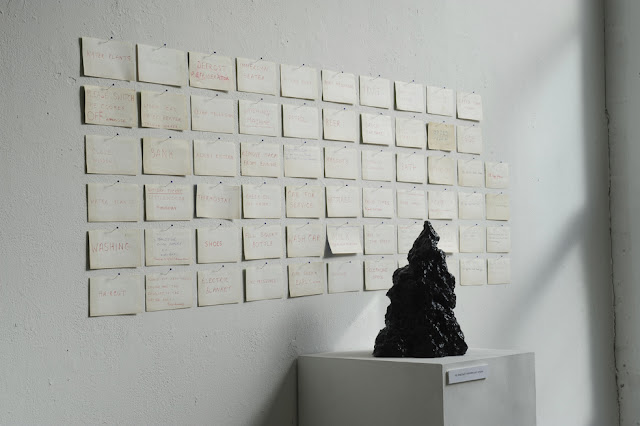 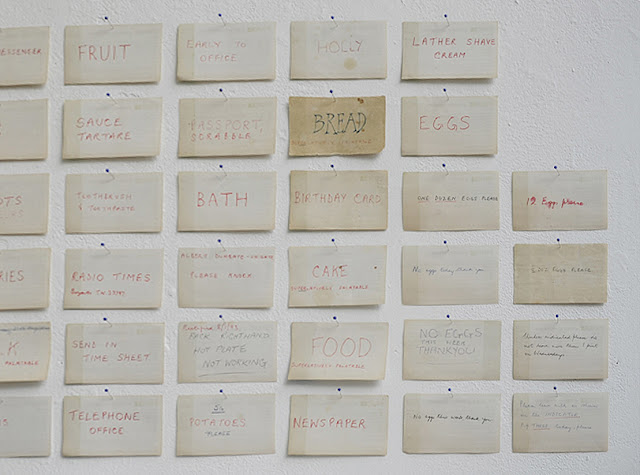 Jake Walker:   You're originally from London, I imagine you were exposed to art museums as a kid. Did art appeal to you early on, or did you have other interests?
sarah crowEST:   I remember going to The Science Museum,The Natural History Museum and the V & A as a child and being enchanted but I don't think I entered an art gallery until I was a teenager. I have hazy memories of The Tate but a big Robert Ryman show at the Whitechapel blew my 17 year old mind. I grew up with a bodgy reproduction of John Constable's "The Haywain" over our mantelpiece. It was a free gift with a washing machine. As a young child I drew all the time and loved meddling with the house-paint tins in the shed. I always loved to make things and my mum taught me to sew beautifully. She was a "domestic science" teacher.
JW:  I can see how the described experiences have soaked into your practice (well all except the Constable print). It sounds like you had a very good grounding in arts and crafts. Your parents were obviously a great influence on you, your Mum through craft and your Dad through note writing.
You recently exhibited a series of reminder notes penned by your father. I loved the piece, could you tell me a little about it?
SC:  Ever since I can remember my dad wrote reminders to himself on the same-sized paper (the back of Frigidaire fridge price-lists) and kept them in a little pile. Whereas most people would write a list of the things they need to do or get.... my dad would select the required words or phrases from his pile and lay them out in a neat grid on the kitchen table usually before bed. For example, if he needed to get "maggots" for fishing or remember to "remove sack from engine" before he drove off in his car, those notes would be utilised. Similarly, various instructions for the milk man or the paper boy were kept ready-to-hand. When my dad became a corpse that pile of notes was my first choice of memento. I feel the most detailed, mundane aspects of his whole life reside in those worn and stained rectangles of paper. They bring him so close to me.

There is also a mound..... He was cremated... I wondered about that....
JW:   The notes are fantastic, I love your dads system. The economy of not having to write out many of the same items over and over is brilliant and more broadly expresses the  pragmatism of a generation that survived a war. These days we feel smug about putting our bottles in the recycling bin would never think to re-use ink. I have long been a fan of text based art work but it is seldom so profound. Colin McCahon spent his later years scrawling out passages from the old testament ostensibly as a form of catharsis but in truth it was alcohol that put him to sleep at night, whereas it seems that your dad just needed know that his notes would be there to greet him in the morning to get a good nights rest. I guess in a sense among other things this work could be peace of mind?
SC:   I like your idea that the notes might contribute to peace of mind. It sweetens something that I've always found very odd. As I child I always found my dad's eccentricity embarrassing. It helps, as gradually see myself becoming more like him, to see these behaviours in a more endearing light.
JW: I really hadn't considered the possibility that your dad was anything more than very organised, but you practice could definitely be considered eccentric. When did the fascination with mounds begin?
SC:  hmmmmn I can't pinpoint it exactly. I've always been attracted to Mike Kelley's (1990s?) work in which things are hidden under blankets thereby creating mounds. The idea interests me that something is lurking but you don't quite know what it is ...you can see 'it' is actually there but it is not clear what it is. With sculpture I am drawn to indeterminate forms, the unseen parts...I like to think about the inside... the unknown.

I have such a wide-ranging curiosity and appetite for reading, looking and making that I often feel I am running several parallel practices as an artist (in fact... I am). The attempt to focus my activity on a particular form 'the mound' is an attempt to contain this aspect of too much of everything. I will just make mounds until I die. Of course I fail to comply with my rule.... as you can see from my mound activity blog, there is unending richness and marvel to be found in looking at even such a simple, primeval form.
JW: I love how the mounds could be seen as accumulation or erosion. In this sense they echo natural geological process. Bronze casting, and to a lesser extent ceramic firing, have to me always resembled volcanic activity. When dealing with forms that resemble rocks this link is more acute. In you paper mache works the process appears to be more about smoothing of or eroding surface even though the process is in fact addition.
As far as we know nature is not critical of its mounds, as a human how do know when you have the lump you want?
SC:  I never know exactly what I want. I have to dive in and agglomerate the matter at hand almost blindly. Then parts of it will bother or delight me and I proceed on that basis to cover or build on the irksome parts and occasionally hack into it. There is a compulsion to make things "sound" and strong, to smooth and seal but I frequently attempt to suspend those urges and accept that which occurs unexpectedly which may not be a very harmonious shape. So... I know the lump I don't want. It's the one I try to live with in the studio that I cannot bear to look at without 'tending' to it and incrementally adjusting the form.
www.sarahcrowest.com
www.moundactivity.blogspot.com.au
Final two photographs are taken by Chris Van der Spuy, of Sarah's exhibiton at The Margaret Lawrence Gallery, VCA, Melbourne, 2012. All other photos by Jake Walker
Newer Post Older Post Home